To share your memory on the wall of Gloria Klopotek, sign in using one of the following options:

We encourage you to share your most beloved memories of Gloria here, so that the family and other loved ones can always see it. You can upload cherished photographs, or share your favorite stories, and can even comment on those shared by others.

Posted Oct 15, 2020 at 08:15pm
I remember our younger days when aunt Gloria would visit with Mike, Dave, Barbara and Diane at mom and dad's on Water Street. My sisters and I would gather around the kitchen table, for as young as we were, she would always include us with her stories and jokes that made us laugh. Her visits were always special as she was so uplifting and a person we always wanted to be near, even at such a young age. Her obituary picture was perfect, depicting exactly what a wonderful, happy person she was, and oh that wonderful smile! Rest in peace aunt Gloria. I'm sure many have welcomed you with open arms, as well as your parents, brothers and sisters, and I'm sure they have all said, "Gloria's here," now let the jokes and laughter begin!
My sympathy, also, is extended to Mike, Dave, Barbara and Diane. Peace be with you all.

Posted Oct 13, 2020 at 04:23pm
Sending many hugs to all. I remember all the fun we had picking pickles. Those were the good old days.
I hope that my parents meet up with yours and have a cold beer together. But I have been told that In Heaven there is NO Beer :(

Posted Oct 12, 2020 at 06:05pm
Our Deepest Sympathy to the Family .. you sure had a wonderful mom and grandma.. She had such a great outlook on life and oh my what a fantastic sense of humor... RIP Gloria.. . Jake and Marge Ceplina
Comment Share
Share via:
RL

I AM SO SORRY SHE WILL BE MISSED BY MANY OF FAMILY AND FRIENDS.I WILL MISS HER JOKES SHE SAID WITH HER SISTERS AND ONE SISTER MY MOTHER.RIP MY AUNT GLORIA LOVE YOU AMEN.HOPE YOU AND MOM GET GOOD SLOTS UP THERE.RON LANDOWSKI. 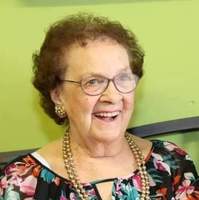