To share your memory on the wall of Mary Duff, sign in using one of the following options:

Mom was born to John and Katherine (Moffat) Bell on August 7, 1944 in Perceton Row, Ayrshire, Scotland. The daughter of a coal miner, Mom grew up sharing the only bedroom in their house with her younger sister, Margaret. The family never owned a car – walking and cycling were a big part of her young adult life.

Mom followed diligently in the strong work ethic of her mother, Kate, and shone at home economics in school, revealing her obvious gift for sewing. One of her earliest jobs included working at a commercial sewing company (and she managed to sew the machine needle right through her thumbnail more than once.) But her skill was demonstrated no clearer than when she made her own wedding dress and then made her daughter’s dress 23 years later.

Mom married dad on October 16, 1965 and their journey around the world began, locations dictated by Dad’s work assignments. They spent a stint in Malaysia and then a few years in Spain, where their first daughter was born. Returning to Scotland, they bought a house in Crosshouse, Ayrshire, close to their families and added another daughter. One of mom’s jobs during this time included bar tending in the evenings at the local pub so she could be home with her daughters during the day. Mom took no nonsense from the locals and had no problem telling them when it was time to head home.

In 1980, Mom and Dad emigrated to Durban, South Africa, where they were both employed by Toyota SA Manufacturing. Mom’s job involved shipping and insurance and she spent many days on the large cargo containers in the Durban harbor as they arrived from Japan. Mom loved her 20+ years there. After retirement, she and dad emigrated to Yakima, WA to be close to their only grandchild. When the sixth and last grandchild, Jessica, was born, they split their time almost every year between months in England with her and the remainder of the year with their American grandchildren.

Mom’s social life revolved around her church families and she made it a point to find a good church and get connected ASAP after she moved somewhere new. Her spiritual gift was serving and she was known as generous, kind, energetic and lots of fun. Children and babies were naturally drawn to Mom (especially the grand and great grandchildren whom she adored) and she spent decades in church nurseries across the globe, where she could usually be seen rocking a baby in her arms and singing.

Mom’s hair was an iconic feature since it went from jet black to snow white before she was 30. Growing up, we always heard comments like, “Oh your mum is the one with the white hair, right?” Yup, that was her. And with her outgoing personality, there weren’t vey many people who didn’t just love her. Regardless of the continents where she lived, she loved to merge right in with the local culture but never lost her beautiful Scottish accent, another thing she was “identified” by in South Africa and the USA.
Mom spent countless hours at the church from cleaning the building to Women’s Bible studies. But it wasn’t until she was in her early 60’s that she learned that she didn’t have a full grasp of her assurance of heaven. She loved God and Jesus but she was still hoping to be “good enough” to go to heaven when she died. That all changed after she accepted Christ as her personal Savior, followed by being baptized by her son-in-law. Her thirst for the Word grew exponentially after that and she grew bolder in her faith as the years passed.

Mom’s “crafty” skills didn’t just stop with sewing. Like all good Scottish women, she knew how to knit but she didn’t learn to crochet until cancer and the pandemic kept her home. She enjoyed scrapbooking and card making, took flower arranging and cake decorating classes in South Africa and learned to quilt while living in Yakima, WA. She had the greenest thumbs of anyone we’ve known and would always carry scissors when out walking so she could “snip a wee bit” of a bush or plant she really liked and then would manage to make it grow into a full plant with practically no effort. Mom welcomed the opportunity to learn technology and could manipulate apps with the best of them, but she did manage to crash a laptop or two after opening virus-filled emails. Her son-in-law says it was part of her charm…as he endeavored to fix it for her!

Mom was preceded in death by her parents. She is survived by her husband, Matt and daughters, Belinda (Rob) Caldwell of Stevens Point, WI and Kristine (Angus) Campbell of Hungerford, England. Six grandchildren: Matthew (Elizabeth), Maria, Marcella, Marcus and Joseph Caldwell and Jessica Duff and two great grandchildren, Ezekiel and Abel Caldwell. She is also survived by her sister, Margaret (Adam) Reid of South Africa, two nieces and four nephews, as well as aunts and cousins around the world.

We want to extend many thanks to the amazing people at Heartland Hospice, especially Lisa Potter, the nurse who went above and beyond. We could not have made it through the past 8 weeks without you.

Visitation will be held Wednesday, May 26 at 10:00 am at Woodlands Church in Plover, WI with memorial service to follow at 11:00 am. Instead of flowers and plants that only mom could have shown appropriate attention to, please make donations in mom’s name to the Pancreatic Cancer Action Network (pancan.org) or Woodlands Church (woodlandschurch.org).

We encourage you to share your most beloved memories of Mary here, so that the family and other loved ones can always see it. You can upload cherished photographs, or share your favorite stories, and can even comment on those shared by others.

Posted May 25, 2021 at 12:50am
I have only had the pleasure of meeting Mary a few years ago.
We were in the nursery together for MOPS, and oh my! How Mary handled those precious Little Ones!
She would cuddle and soothe them, and sing so sweetly in the nursery for all of us to enjoy!
What a precious Lady she is!
Lynn
Comment Share
Share via: 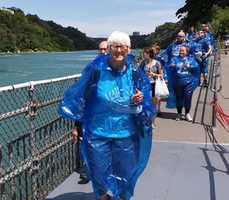 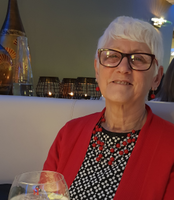