To share your memory on the wall of Berniece Ward, sign in using one of the following options:

Print
Berniece E. Ward age 101, of Stevens Point, went to heaven Monday evening June 28, 2021 with her family at her side.

A Mass of Christian Burial for Berniece will be held at 11:00 AM on Friday July 2, 2021 at St. Bronislava Catholic Churc... Read More
Berniece E. Ward age 101, of Stevens Point, went to heaven Monday evening June 28, 2021 with her family at her side.

A Mass of Christian Burial for Berniece will be held at 11:00 AM on Friday July 2, 2021 at St. Bronislava Catholic Church in Plover. Burial will be in the Plover Cemetery. Friends and family will gather to share memories from10:00 AM until the time of services at the church. Shuda Funeral Service is assisting the family.

Berniece was born June 13, 1920 in Plover, the daughter of Andrew and Mary (Berna) Eickendorf. She graduated from Emerson High School in 1938 and was a 1942 graduate of the St. Joseph School of Nursing in Marshfield. She entered the United States Army serving as a nurse during WW2 in the Philippines.
Following her honorable discharge she returned to the area and married Walter Ward on July 22, 1947. The couple settled first in the Lake Emily area and later moved to Arnott where they ran the Arnott Cheese Factory. While raising her family, Berniece shared her compassionate spirit working at River Pines, St. Michaels Hospital then retiring from the Veterans Home in King

She enjoyed cooking,baking, spending time with family, especially annual trips up north with her girls.

We encourage you to share your most beloved memories of Berniece here, so that the family and other loved ones can always see it. You can upload cherished photographs, or share your favorite stories, and can even comment on those shared by others. 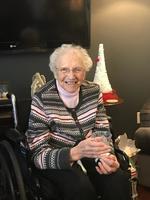